I have obtained the manual (by the same manufacturer) for another version of the same 3-phase generator, and its circuit is below the original.

This circuit relies on the fact that the phase difference between the output of a Wein oscillator and the junction of the CR in the series feedback is constant, regardless of the oscillation frequency.

Phases are derived from adding appropriate magnitudes and signs of voltages obtained from these two.   It is my version of a circuit I came across in commercially built equipment.

The original had a few pre-set pots so one could adjust the amplitudes of and phase differences between the outputs.  The pots have been eliminated by using two resistors in series in a couple of places.

Due to a bit of lost motion between the shaft and rear section of the dual amplitude-setting pot, there is a very small variation in the amplitudes and phases of the outputs as the direction of rotation is changed.  This would have made a total nonsense of using the afore-mentioned pre-sets.  It is of no consequence in the application for which it was built, but is a bit disappointing in a pot of this pedigree (Bourns).

The one I built (see photos) was switchable between 50 and 400Hz. 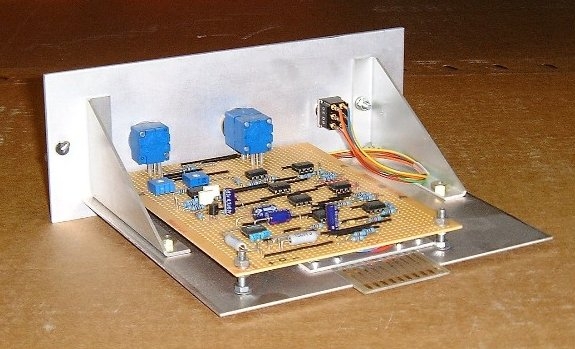 Alternative circuit as per the manufacturers' handbook.

Slight differences between the two.

The strange values of resistance are those listed in the manufacturers manual.

The phases are derived as follows.

E0 is passed through a voltage follower, IC4, to produce E5  (phase A)